Reasons for marking a Centenary

The short manuscript note, pictured below, is kept in the monastery archives of the Galway Poor Clare Community.  It was found behind a framed monogram of the Holy Name of Jesus. The main body of the script records the day and the date that the picture was put up and a short barely legible post script at the end of the inscription reads as follows: 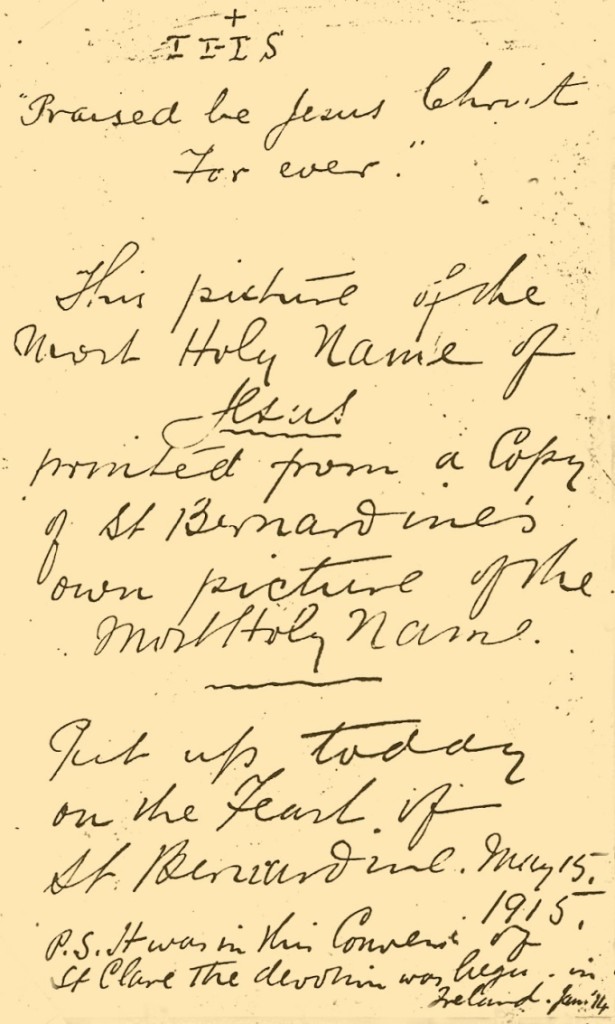 PS. It was in this convent of St. Clare the devotion was
begun in Ireland, Jan ‘14

From January 1914 onwards the Holy Name apostolate gained momentum. Many people, both religious and lay people, got involved in spreading the devotion. The Franciscan Missionaries of Mary, who were based in Loughlynn, Co. Roscommon at that time, helped to produce Holy Name badges and leaflets. A group of Franciscan lay people (known as the Third Order of St. Francis in those days) helped Fr. Francis set up a Temperance Association under the patronage of the Holy Name of Jesus when he was based in Cork. Another layman, who had no particular connection with the Franciscans, went to Galway around that time on a day trip, saw the blue Holy Name tiles over the doors of some of the recently built houses, thought it was a great idea and had great success in spreading this form of devotion among his friends and neighbours when he returned to his home city of Limerick. (This man’s grandson is now a friar of the Irish Province!)  By November 1914, Gill & Son of 50 Upper O’ Connell Street, Dublin were printing copies of the original YHS tablet of St. Bernardine in two different sizes available free by sending two one penny stamps.  (St. Bernardine used YHS and not IHS; both are abbreviated versions of the Name of Jesus in Greek.)