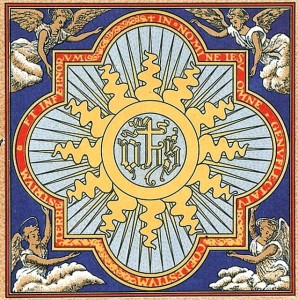 The Holy Name of Jesus has been venerated since the beginning of Christianity and appears in the earliest Christian manuscripts in Greek under the abbreviated form IH which consists of the first two letters of the Name of Jesus in Greek:  IHƩOYƩ .

In the second century the final Greek character was added to the IH abbreviation making it IHƩ. This in turn was transliterated into Latin or English characters as IHS. This custom became universal by the sixth century. The IHS monogram was later adopted by the Jesuit Order as an abbreviation for Iesus Hominum Salvator which we see today on Pope Francis’ coat of arms.

Though there was a steady growth of devotion to the Holy Name in the middle ages, through the writings of St Bernard and others. It was the observant Franciscan reformer St Bernardine who depicted the Holy Name superimposed on yellow rays, representing Jesus the Sun of Righteous shedding His grace and light on us. The Franciscans made the devotion widely popular among ordinary people in the fifteenth century. Some of Bernardine’s own paintings of the monogram are still preserved.