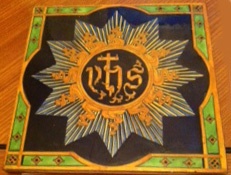 The Stoneybatter Holy Name plaque .’Made in England 1928’ is inscribed on the back of it.

So far only one Holy Name Plaque has come to light in the Dublin area and that is at a house on Aughrim Street, Stoneybatter Dublin 7. The house was built in 1860 and was acquired by the O’ Reilly family in 1910. The O’ Reilly’s still live there. The plaque is treasured by Mrs. O’ Reilly who believes in the power of the Name of Jesus to protect her home and family. She is not aware of any other Holy Name plaques in the locality.

Interestingly the plaque is in place leaning against the window above the front door ( called the’ fanlight’) and is not attached to anything, so it is possible to read the inscription on the back of it which says: 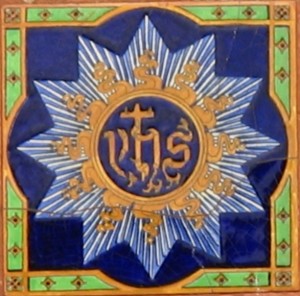 An example of a Holy Name plaque photographed
in Limerick