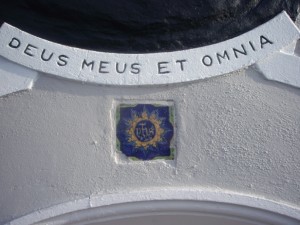 The first is over the front door of the monastery and is in fairly good condition. As you can see the edges aren’t all that clear because of plastering and painting jobs over the years. The door over which the tile is located was originally the entrance to a porch going into the Extern Convent, but in 2009 it was incorporated into the rest of the building when renovations were undertaken to modernise the welcome area. 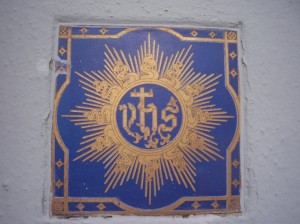 Here is another example located over the porch of the Chapel of the monastery. It seems that this is a later example. The New Choir and sacristy were built in 1929 and there are Holy Name tiles to be seen on both the outer east and west facing walls, as well as over the sacristy door. Those three tiles have the green stripe around the edges. This one as you can see is blue around the edge. It seems that the Chapel porch was added on at some stage after 1929 and that the tiles with the green stripe are the older ones. Also, the tiles with the green stripe have a gloss finish whereas the one with the blue strip has a matt finish. You should also be aware that the tiles vary in regard to their state of repair. 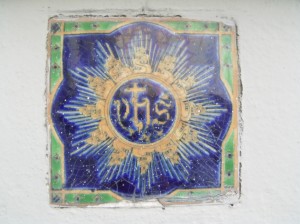 This next example is from over the sacristy door, one of the three on the outer walls of the nuns’ chapel (1929) As you can see it is not in a great state of repair. There is a significant number of cracks in it and lots of splashes of paint! I suppose a lot depends on how exposed each tile is to the elements! 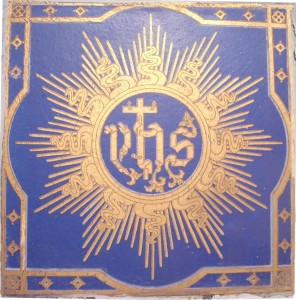 There is a lot of detail in the monogram. You’ll notice that there are little nails in the appropriate places in the Cross giving the clear message that the salvation that comes through the Name of Jesus flow through the sacrifice of Calvary. The Name of Jesus, set in the middle of the sun, suggests Jesus as the light of the world. The twelve rays represent the twelve apostles and the smaller rays (there should be 72) represent the missionary mandate of the Gospel. The message here is that once we come to know the Lord Jesus we can’t keep the good news to ourselves. It’s a reference to the passage in St. Luke’s Gospel where our Lord ‘sent out seventy two others’

There was a description in Ireland’s Own some time back of the tiles that can be seen in the Limerick area. The lady writing mentions gold diamonds with red centres and a Cross with four, red, short arms in the corners. As yet I haven’t noticed red in any of the pictures I have seen of the tiles in the Galway area. I don’t have any pictures with red. It’s likely that there were different batches arriving in Ireland over those years when the devotion was popular.

There is one other piece of information that might be of interest. By November 1914, Gill & Son of 50 Upper O’ Connell Street, Dublin were printing copies of the original YHS tablet of St. Bernardine of Siena in two different sizes available free by sending two one penny stamps. St. Bernardine used YHS and not IHS; both are abbreviated versions of the Name of Jesus in Greek. We think that this is one of those prints even though the name of the publisher isn’t on it.

Around the edges you will notice the words:

‘In Nomine Iesu omne genu flectatur terrestrium et infernorum’ which mean ‘In the Name of Jesus every knee shall bow in heaven and on earth and under the earth’ This quotation comes from St. Paul’s letter to the Philippians (2:10)

At the bottom of the print it says

‘Standard of the Most Holy Name of Jesus’

And underneath those words is written :

‘Proposed for veneration by St. Bernardine of Siena.’

This print was hung on a wall in the Extern Convent on the Feast of St. Bernardine, May 20h, 1915. They would have been available sooner than November 1914 if they were printed by Gill &Son